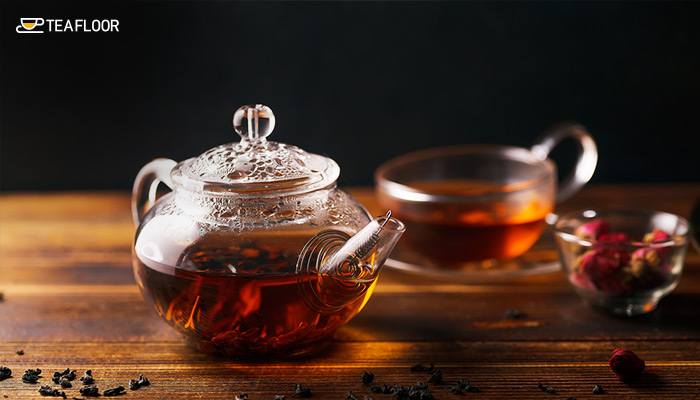 Black tea is a type of tea that is made from the leaves of the tea plant called Camellia sinensis. It is the same plant which is also used to make white tea, green tea, and oolong tea. For procuring black tea, there are two principal varieties of the Camellia sinensis plant which are used. These are the small leaves Chinese variety plant and the large-leaved Assamese variety plant. Generally, for procuring black tea, the leaves from the large-leaved Assamese variety plant are used. When compared with other varieties of tea such as white tea, green tea, and oolong tea; black tea is more oxidized.

In China as well as in the languages of a few of its neighbouring counties, black tea is also known as “red tea.” It is referred to as red tea based on the description of the colour of the brewed tea which has deep red hues. In the Western languages, black tea is called black tea based on the type of the colour of leaves which become black due to the process of full oxidation which they undergo at the time of processing.

• Assam Black Tea- This variety is a full-bodied tea from the lowlands of Assam. It has a strong and a distinctive malty flavour. Assam black tea is the highest produced tea in the world.

• Darjeeling Black Tea- This variety of a thin bodied tea from the Darjeeling district of West Bengal in India. It has a floral and fruity aroma and taste with defining muscatel tones. Today, Darjeeling tea is often processed as a mixture of black, oolong and green tea elements. Even so, it is still classified as black tea.

• Kangra Black tea- This variety of Black tea originates from The Kangra district in the state of Himachal Pradesh of India. It has a subtle pungency and a vegetal aroma. The Kangra district produces basil cinnamon and java plum-blueberry blends as well as Chinese hybrid teas. The brew is a pale liquid.

• Munnar Black tea- This variety of black tea is grown in the Munnar Town of Idukki district of Kerala state in India. It produces a robust-bodied tea. The color of the brew is golden yellow liquor. The flavour has a refreshing briskness and a hint of fruit. The fragrance is quite medium tones and is akin to malted biscuits.

• Nilgiri Black tea- This variety of black tea originates in the Nilgiri hills in the Nilgiri district of Tamil Nadu state of India. It is an intensely aromatic, fragrant and robust tea.

What are the Different Blends of Black Tea?

• English Breakfast Tea- This is a full-bodied black tea which is blended ties milk and sugar. It has a robust and rich flavour.
• English Afternoon Tea– This is a medium-bodied black tea. It has a bright and refreshing flavor. For preparing this blend, strong Assam and Kenyan teas are blended with Ceylon. The Ceylon adds light and a brisk quality to the enlist afternoon tea blend.
• Irish Breakfast Tea- This type of black tea is a blend of several varieties of tea. The blend most often includes Assam teas. Although sometimes other varieties of black tea are used, they are used less often.
• Masala Chai- This is one of the most famous types of black tea which originated in India. Although in a slightly different form, the blend was first introduced by the British East India Company in India during the British Raj to encourage tea consumption among Indians and to also complete with Chinese tea plantations. Traditionally masala chai is a mixture of black tea, milk, a sweetener such as sugar or honey and spices such as green cardamom pods, cinnamon sticks, ground cloves, ground ginger, and black peppercorn. In the West, masala chai has been adapted with some changes to the method of preparation.

How to Brew Black Tea?

As a general rule of thumb, for brewing black tea use about 4 grams of tea for every 200 ml of water. In other words, for every cup of water use about 1 level teaspoon of black tea leaves. For a much stronger and full-bodied tea, you may use one heaping teaspoon of black tea leaves. Black tea should be steeped in water which is heated up to 90–95 degree Celsius. This is unlike green tea which should not be brewed at a very temperature since it turns bitter. For brewing black tea, the first brew should be 60 seconds. The second brew should be 40 seconds, and the third brew should be 60 seconds. If you are using high-quality tea leaves, then you can continue using the same leaves for brewing a fourth and a fifth time but add 10 seconds to the brew time after the third infusion.

4 grams of tea per 200 ml of water. Unlike green teas, which turn bitter when brewed at higher temperatures, black tea should be steeped in water brought up to 90–95 °C. The first brew should be 60 sec., the second brew 40 sec., and the third brew 60 sec. If your tea is of high quality, you can continue to brew by progressively adding 10 sec. To the brew time following the third infusion (note: when using a larger teapot the ratio of tea to water will need to be adjusted to achieve similar results). If you are using a delicate variety of black tea such as Darjeeling black tea, then you should steep the tea leaves for about 3 to 4 minutes. Similarly, broken leaf teas need less brewing time than whole leaf black teas since the surface area of the broken leaf teas is much more than whole leaf teas. If the whole leaf black tea and other black teas are going to be served with milk or lemon, then you should steep them for longer, i.e., for about 4 to 5 minutes. Once you have finished brewing the tea for the stipulated time, you should strain it using a fine mesh strainer before serving.

2 Replies to “All About Black Tea | Benefits Of Black Tea”