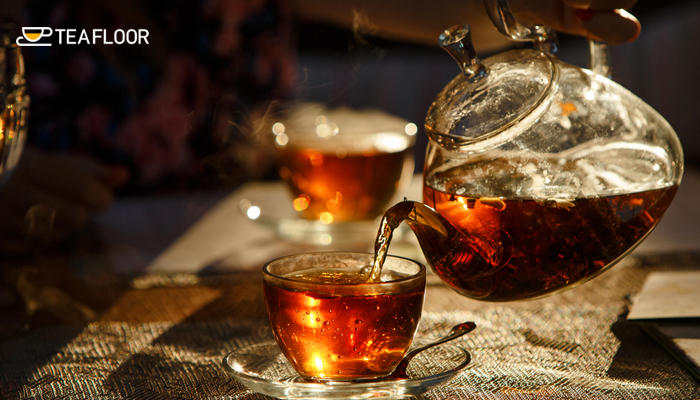 Tea drinking is an old age tradition. It is said that drinking tea first began during 2737 BCE. According to legends surrounding tea, there was a Chinese emperor who was called Shennong. He found his water to be greatly improved when a dried leaf fell from a plant into his cup. The leaf was from a wide tea plant. Thus, black tea was discovered. Today, tea drinking has spread around the world, and millions of people consume it on a daily basis. There are hundreds of tea recipes and preparation styles which have evolved since.

Tea is made from the leaves of the Camellia sinensis tea plant. There are only four varieties of tea which are made from the tea leaves harvested from the tea plant. These are called black tea, white tea, green tea and oolong tea. Amongst these, black tea is the one whose leaves are fully oxidized. Black tea also happens to be the most popular variety of tea amongst all types. In fact, market research states that black tea is the variety of tea which has the most sales in the world. In this article, we are going to be exploring some of the black tea drinks that people enjoy around the world.

Black Tea around the world

• Tibet- You must have heard of and even had a tea which has milk or lemon added to it. But have you ever come across a tea recipe which has some salty butter listed in the ingredients? If not, then you are living under a rock, my friend! “Po cha” is a traditional tea drink in Tibet. This type of tea is made by boiling a brick of Pemagul black tea. The brick of Pumagul black tea is in fact boiled for hours! Afterwards, milk salt and yak butter arcaded to it. The mixture is then churned together. In the high altitude and cold climate of Tibet, this soup-like blend of tea is uniquely comforting as well as fortifying at the same time making it a popular choice.

• India- India is not only one of the world’s leading producers and exporters of tea, but it is also one of the leading consumers of tea as well. Millions of people in India begin their day by having a cup of tea in the mornings along with their breakfast. Although India produces mostly all varieties of tea, it is black tea in the form of “masala chai” that the Indian people are a fan of and cannot function without! Most traditional recipes of masala chai include a concoction of black tea leaves brewed in a mixture of water and milk along with the additions of spices and roots like cardamon, ginger root, black peppercorns, nutmeg, cloves and a sweetener. Sugar is the sweetener which is preferred by most in India. If you happen to visit India, then you will be surprised by how easily you can get a cup of masala chai and for how cheap you can get it too! You will find chai-wallahs i.e. tea sellers at almost every street and street corners. Along with being a popular breakfast time tea, it is also offered to house guests, business clients etc. If you truly wish to get the best taste from your cup of masala chai, try having masala chai in the small clay cups which are made with local earth. These small clay cups are called “kullad”.

• Russia- In Russia, the tea traditions were formed during its earlier days at a time when the food and drinks rations needed to be stretched to serve as many people as possible. These shortages in food and drinks rations lead to the recipe of “zavarka”. Zavarka is a loose leaf tea concentrate which is brewed in a small metal container. The metal container is called samovar. In the samovar, a very strong black tea is brewed which is then poured into large mugs. However, the strong brewed black tea is not served filled completely in the cup. In fact, only an inch or less of this strong tea is filled in the mugs and hot or boiling water is added on top to fill the rest of the mug as well as to tame the strong tea. Typically, the Russians like to drink this tea black without the addition of milk or sugar. However, the hosts do offer milk and sugar and some accompanying snack as well to go with the tea. In fact, in zavarka if tea is served without any cookies or crackers or some kind of a punchable snack, it is said that it is served “naked” and is considered to be rude.

• Thailand- During the Chinese Civil war, as it was nearing the end of the war during the year 1949, refugees from China were fleeing to Thailand. They brought elements of the Chinese culture with them. One of the traditions included tea drinking. China has a rich tea culture which was then also introduced in Thailand. However, a unique tea culture developed in China with the evolutions of Thai iced tea. Thai iced tea is an amber coloured and is called Cha Yen. The Cha Yen is a concoction of Assam black tea with sugar, condensed milk and spices like star anise, tamarind and orange blossom. The Thai Iced tea is served in tall glasses filled with ice. Some of the more popular recipes include topping the iced tea with some evaporated milk and creating an appealing ombre effect. The Cha Yen is a sweet and spicy treat. Although this drink is high in calories due to the addition of sugar and condensed milk, it is an incredibly refreshing tea during hot days and is also quite complementary with the Thailand culture’s spicy cuisine.

• Malaysia- In this country, “teh Tarik” or pulled tea is the popular type of tea. It is a concoction of black tea, sugar and condensed milk. What makes this tea different from other similar recipes is in how it is prepared. This type of tea is quite frothy and the frothy consistency is achieved by pouring the beverage back and forth between mugs thus exposing the liquid to cool air as it flows from one mug to another. If you happen to be n Malaysia, then while you are enjoying your cup of Malaysian tea, you will also get to enjoy the showmanship of preparing this tea. You will get to witness an elaborate and energetic dance as the tea brewers dance with the mugs and prepare the tea!
So, which black tea would you like to try next from around the world?

3 Replies to “Black Tea Around the World”