The thought of waking up early and going for a jog sounds nice, doesn’t it? But then so does the idea of waking up to win a lottery. Honestly, the odds are about the same, especially for a certified night owl. Unlike popular belief, night owls are not an uncommon phenomenon. They live in one of those apartments of your society, which never turns the light off. They are the same ones who drag their feet to work with a cup of tea in their hand, having downed two before that. And when a New Year comes around, these late night innovators try to turn over a new leaf. Unfortunately, with hopes of getting the worm, they turn themselves into permanently exhausted pigeons. However, there is always a do-able New Year resolution that they can take on, as a late risers, which will not only help them wake up early but also live healthy life general.

It is truly said that the early bird gets the worm. A recent survey by The Guardian confirms this idea, reporting that many CEOs of successful companies wake up early by 5 a.m. But if you are a night owl, then becoming a morning lark requires some arduous habits that you must adapt to.

Habits to Adopt this New Year to Wake Up Early

Many of us wish to experience the joy of mornings. The beautiful rays of sunlight filtering into our rooms through glistening windows, as we stretch out of our blankets and ready ourselves for a day full of possibilities. Even night owls have the chance to experience this sheer joy once in a while. However, people take waking up as a challenge rather than an opportunity to become proactive.

The main question here is- can you wake up early without compromising on your health?

According to Dr. W. Christopher Winter, a spokesperson for the American Academy of Sleep Medicine, it is possible, but not easy, “Your genes determine what we call your ‘chronotype,’ which is if you are a morning or evening person,” says Winter, “It’s often similar within families, but it can be influenced to a certain degree.”

Changing your chronotype takes about two-three weeks, but you have to stick with it. If you slack off, you’ll drift back to your natural tendencies. Morning people don’t use willpower to rise and shine; they use habits. To fix your internal clock and wake up early, here are a few tried and tested habits that early risers swear by: 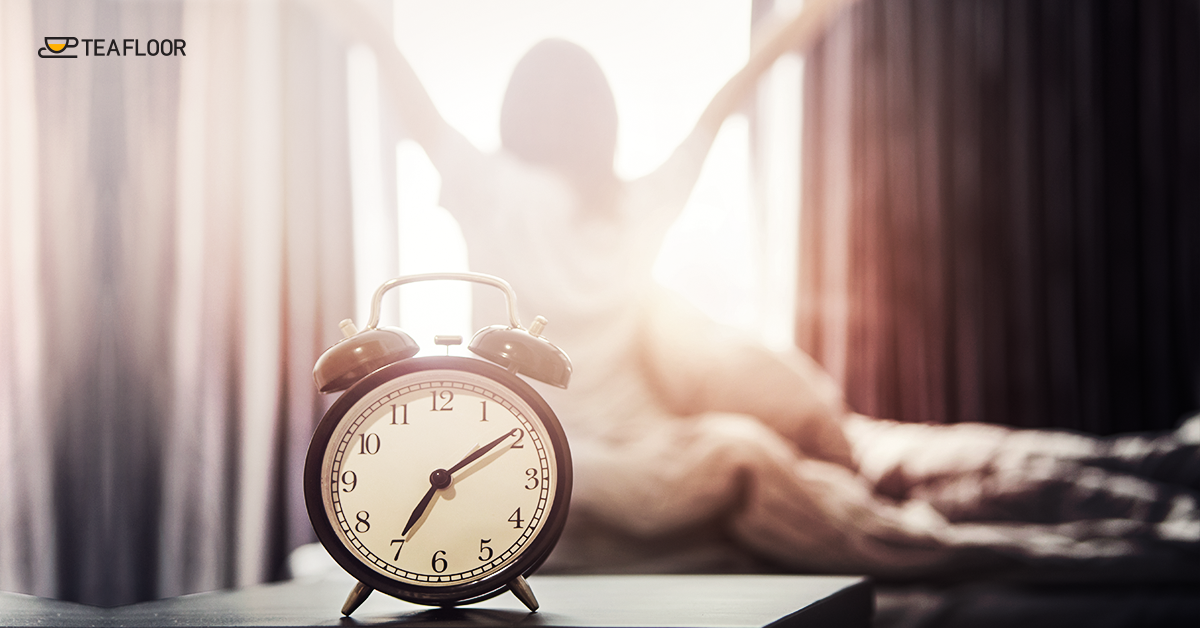 1. Give yourself a schedule but don’t stress over bedtime

One of the best ways to make your body enthusiastic for the day ahead is to wake up early, exercise, eat something healthy or do something productive. A New Year resolution becomes better motivation to put yourself on a schedule. This way you let your body and mind go to bed every night with anticipation of the next day’s schedule. However, you do not need to give yourself a bedtime. By giving yourself a bedtime, you stress your body and mind if you do not adhere to it. Once your body falls into the schedule every morning, the bedtime will sort itself out because you’ll be tired. The problem, however, arises when you drift back to older patterns during weekends and vacations. Sleeping in on weekends tells your body that your early morning routine is just an offhand schedule and that it should stick to its earlier patterns. To become a morning person, it’s essential to get up early on weekends, even if you were out late the night before. It should also be noted that an average human being requires at least 6-8 hours of sleep. Therefore, it is imperative for you to plan your schedule in a way that you can accommodate both your required number of sleeping hours and your morning schedule.

2. Stop hitting snooze and use a smart alarm instead

Not hitting the snooze button might just be the most ‘un-millennial’ thing ever. Snoozing was designed to allow people to go back to sleep for a few minutes without reentering a deep sleep cycle, but it can hinder your transformation into an early riser. It makes you groggier by interrupting your body’s natural sleep cycle. Plus, it’s not the best thing to do when you’re New Year resolution is to wake up early. When you begin the day reacting to your environment instead of proactively shaping it, you find yourself on the defensive side. Instead of using a regular phone alarm clock, this New Year, opt for apps like Smart Alarm or Math Alarm. Such alarms require you to solve a math problem to turn the alarm off. Solving a problem will awaken your brain enough to make an informed decision. Conversely, if you don’t like staring into the face of math early in the morning, you can choose to dance yourself awake to a new song every morning. Just set your alarm on random from your playlist. Different songs with a gentle start that build up will help you wake up gradually but more effectively. 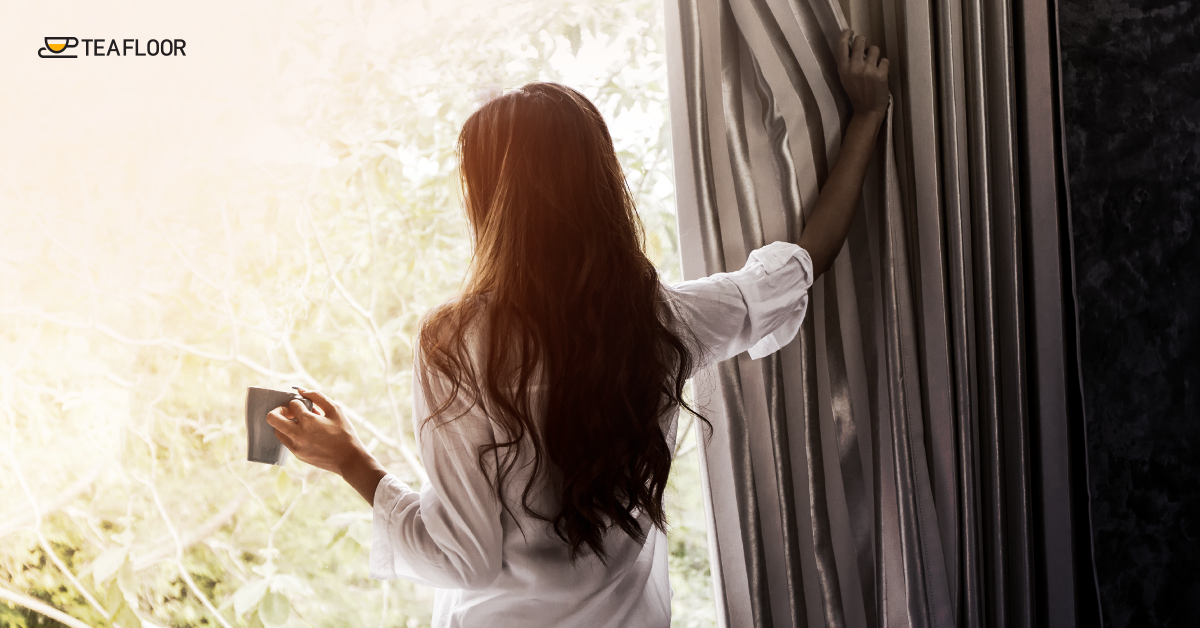 3. Grab yourself a cup of tea

Now we know what you’re thinking- ‘Grab a cup of tea when I can easily make myself a cup of coffee?’

Another popular myth attached to millennials, especially night owls, is that their engines run on coffee. Some even believe that coffee runs in their veins rather than blood. However, this is nothing but a myth. Coffee has its perks and enjoys its separate glory, however, the working millennial of today should start their day with a fresh, hot cup of tea. Tea, though lower in caffeine, has a regulated caffeine release system. This allows the body to get the right amount of caffeine to wake up early but doesn’t give a caffeine crash, unlike coffee. Similarly, there are many flavours and blends explicitly designed to awaken the mind and help kick-start your metabolism, like ChaiSpa’s Urja and Spoorti. Sipping on a soothing cup of tea will give you a few minutes to yourself, to gather your thoughts and plan your day ahead. Or you could just scroll through social media. Though not the best option but the choice is entirely yours.

4. Do something productive or positive

The very idea of doing something upon waking up sounds quiet taxing to a transforming night owl. However, research shows that getting out of bed on the right foot can impact your mood for the entire day. That is why experts always suggest planning a healthy or positive activity like a workout session, meditation or yoga. For some it may just be writing down a few things that they’re grateful for, maybe reading an elevating article, or listening to an inspirational podcast. You could utilise this opportunity to start a new habit that you wanted to with the New Year. The time you give yourself during this activity helps you clear your mind. This way, when you wake up early you won’t look at everyone with a stink eye and grumpy face for the rest of the day.

5. Let there be light

Out of all of the ‘hacks’ to wake up early, the one that many people think is passable is waking up to natural light. This is mostly because the millennial generation lives in cramped up city apartments with very less or no natural light. However, experts cannot emphasize enough how critical it is for your bodies to get a dose of natural light the moment you wake up. According to popular stigma, night owls cannot tolerate sunlight and have a tendency to ‘spontaneously combust’ upon exposure. Nevertheless, exposing your body to light gives your brain the signal to stop producing melatonin, a hormone that regulates sleep. This way, your body gets the indication that the day has begun and it is time to spring into action. For those who live in one of those cramped up concrete boxes, with no natural light, opt for a wake-up lamp which instigates an ‘artificial dawn’ into your room. So, this New Year, you won’t have an excuse to not fulfill your resolution because you had no windows in the room.

“Habits eliminate the need for self-control,” writes Gretchen Rubin in her book Better Than Before, “Habits make change possible by freeing us from decision-making.”

In other words, early risers don’t think about getting up—they just do it. Many members of the 5 AM club say that they don’t fret over the thought that they have to wake up early. They just do. Becoming a morning person is a challenging task and it is not something you can achieve by doing once or twice. To wake up early, you need to instil some habits in yourself so that you do not turn from a night owl to a permanently exhausted pigeon. To keep your New Year resolution of becoming an early bird you require some effort. Nonetheless, you have to begin somewhere, so why not begin with a cup of tea?