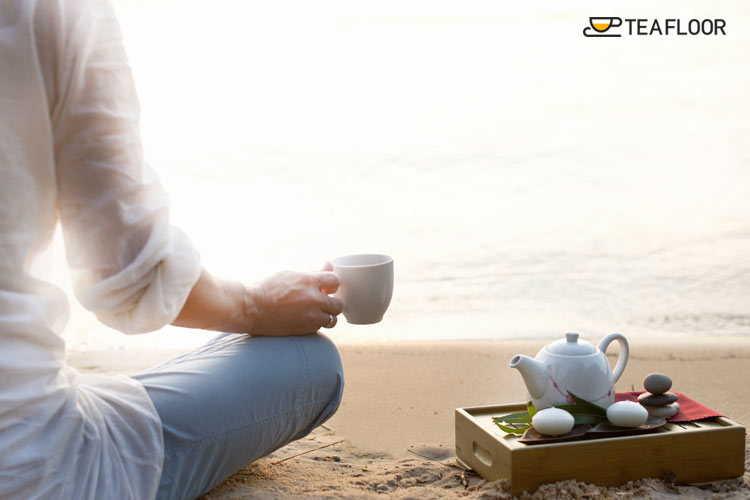 Green Tea is produced by heating the leaves shortly after harvesting through a process of steaming or pan-firing to prevent oxidation from occurring, and then rolling and drying the leaves. Black and Oolong Tea undergo full or partial oxidation, which makes the leaves and subsequent brew darker in color.

History speaks for itself:  Tea is believed to “purify the body” and “preserve the mind”. Ancient Chinese tradition used tea as a miracle decoction for the cure of various diseases. Over the past several decades, thousands of published studies in leading medical journals have provided the proof to support tea’s ancient health claims.

Tea consists of more than a hundred ingredients of which the main are the flavonoids. These flavonoids and the related polyphenols account for more than a third of the weight of the tea leaves. The health benefits of tea are said to be attributed to these ingredients. Tea has cardiovascular, chemo-preventive, metabolic, neuroprotective and other health benefits.

Various researches have been conducted which demonstrates the health attributes of tea flavonoids. Human clinical trials, population-based studies and in vitro laboratory research have found that people who regularly consume three or more cups of Black Tea per day have a reduced risk of cardiovascular conditions, cancers etc.

Let us find out how tea may play important roles in various areas of health operating through a number of different mechanisms.

Cardiovascular diseases cause more than 15 million deaths in the world each year, according to the World Health Organization (WHO; Geneva). They are also the major cause of death in adults. In addition, many cardiovascular incidents are not necessarily fatal but may impair the ability to lead a normal daily life, resulting in enormous health care costs to society.

Drinking tea regularly as part of a healthy lifestyle may help maintain a healthy heart. Numerous population health studies conducted around the world have demonstrated that drinking tea is linked to a reduced risk of cardiovascular disease. The researchers have also found that those who drank more than six cups of tea per day (>480 mL) had significantly lower prevalence of CHD than non-tea drinkers.

While much of the strongest research support for tea’s potential to contribute to heart health has focused on black tea, new research has shown that green tea also offers cardiovascular benefits. Some studies suggest that tea flavonoids provide several mechanisms that work in tandem to collectively improve markers for cardiovascular health.

High blood cholesterol is a major risk factor for heart disease and stroke. High cholesterol can lead to a buildup of plaque in the artery walls and narrow the arteries. Tea and its flavonoids can have a significant cholesterol-lowering effect. A research was published in 2003 in the Journal of Nutrition, which stated that people consuming five servings of black tea per day reduced “bad” LDL cholesterol by 11.1 percent and total cholesterol by 6.5 percent.

More than 3,000 published research studies exist that evaluate the role tea whether white, green, oolong or black and tea compounds, such as epigallocatechin gallate (EGCG), may play in cancers of various sites. The studies suggest that tea compounds have many mechanisms by which they provide chemoprotection: reducing free radical and DNA damage; inhibiting uncontrolled cell growth etc.

Various studies have shown that green tea has the most superior cancer risk reduction as compared to all the other forms of tea. This is attributed to the strong antioxidant activity (and other bioactive properties) of green tea polyphenols such as EGCG and ECG.

Tea also plays a major role in preventing prostate cancer. Based on epidemiological in vitro and in vivo studies, the researchers suggest that tea-especially Green Tea may be a good public health recommendation that may help prevent prostate cancer. It also plays some role in the reduction of various other forms of cancer such as Digestive cancers, Skin cancer, and lung cancer.

Age-related declines in memory and cognition occur naturally, but research suggests that modifiable factors, such as diet and exercise, may help slow the progression of age-related neurodegeneration. The bioactive compounds found in tea may promote neurological health through various actions.  In addition, L-theanine in tea has been shown to directly affect areas of the brain that control attention and ability to solve complex problems.

Research reports that tea polyphenols, particularly (-)-epigallocatechin-3-gallate, are bioavailable to the brain and can act via antioxidant, iron-chelation, signal transduction modulation, and other mechanisms to effect neuroprotective and/or neurorescue action, with potential implications for age-related dementia, and Alzheimer’s and Parkinson’s diseases.

A recent human study examined the effect of the unique tea amino acid L-theanine (glutamyl ethyl amide) on attention-related task performance. Task performance was measured by electroencephalographic (EEG), or the measurement of electrical activity produced by the brain as recorded from electrodes placed on the scalp. The results suggest L-theanine plays a role in attentional processing in synergy with caffeine.

4. Role in Obesity and weight loss

Green Tea catechins led to a reduction in body fat, blood pressure, and LDL cholesterol compared to the control group. The authors suggest that Green Tea catechins may help prevent obesity and reduce the risk for cardiovascular disease.

Type 2 diabetes is considered a global epidemic. 85 Catechins in tea have been shown to help reduce blood sugar and provide insulin-boosting activity, which may be beneficial for people with both type 1 and type 2 diabetes. Recent USDA research reviewed the effect of tea on insulin sensitivity and risk factors for diabetes. Epidemiologic studies suggest some relation between tea consumption and a reduced risk of type 2 diabetes. Some human clinical studies show tea and its components improved control of glucose metabolism.

Hence, tea plays an important role in the control of blood sugar level, although further research may be needed.

Our immune system is responsible for warding off bacterial, fungal and viral infections that cause disease and illness, such as influenza, thrush, and herpes. Immune system impairment can cause a variety of symptoms including fatigue, muscle weakness, susceptibility to infection, tissue inflammation, poor wound healing and heightened allergic reactions.

The main role is played by the antioxidants present in the tea which are responsible for boosting the immune system. Tea contains a component that can help the body ward off infection and disease and that drinking tea may strengthen the immune system. The researchers identified a substance in tea, L-theanine, which primes the immune system in fighting infection, bacteria, viruses and fungi.

Tea may contribute to oral health through various characteristics, including anti-bacterial properties and fluoride content, that may help protect against cavities and gum disease and may strengthen tooth enamel.

Tea flavonoids may inhibit the plaque-forming ability of oral bacteria, and the fluoride in tea may support healthy tooth enamel. Because green tea controls bacteria and lowers the acidity of saliva and dental plaque, it may be a useful tool in preventing cavities. A recent Egypt-based study tested people before and after they gave their mouths a five-minute rinse with green tea. The test subjects had less bacteria and acid in their mouths, as well as reduced gum bleeding.

Green tea’s anti-inflammatory powers seem to help control periodontal (gum) disease. A Japanese survey of almost 1,000 men found that those who drank green tea regularly had healthier gums than those who didn’t. Also, Green tea has been associated with better-smelling breath because it kills the microbes that make our mouths stinky.

Drinking tea has been linked to higher bone mineral density (BMD) and has been shown to boost bone-building markers and improve muscle mass, both of which may reduce the of osteoporosis and fracture.

A study published in the American Journal of Clinical Nutrition found that older women who drank tea had higher BMD measurements than those who did not drink tea. A recent study found that habitual tea-drinking was seen to have a significant beneficial effect on the BMD of adults (30 years and older), especially in those who had been habitual tea-drinkers for six or more years.

green tea and many herbal teas may help improve your digestion and limit any adverse digestive effects, such as gas and upset stomach. Green tea may be beneficial for digestion because of substances it contains called polyphenols, including catechins. A study published in the “Journal of Agricultural and Food Chemistry” in 2005 found that catechins from green tea increase the activity of pepsin, the digestive enzyme that breaks down proteins in the stomach.

Chai tea, which contains a mix of spices including cinnamon, pepper, cardamom and ginger, may also be beneficial for digestion. Cinnamon may help relieve a variety of digestive ailments, such as gas, indigestion, heartburn, stomach cramps and nausea.

A wide variety of herbal teas is also sometimes credited with improving digestion.

Tea drinkers tend to be healthier, which proves true in research too, as tea drinking correlates with better health outcomes.

You can support your health, including your skin and body composition, with as few as 2-3 cups per day, so join this growing health movement and start today exploring the novelty of tea.

Just like wine or coffee, there are countless types, blends, styles, countries of origins and more, all for you to try. I’m sure there is a tea to suit any taste and preference.