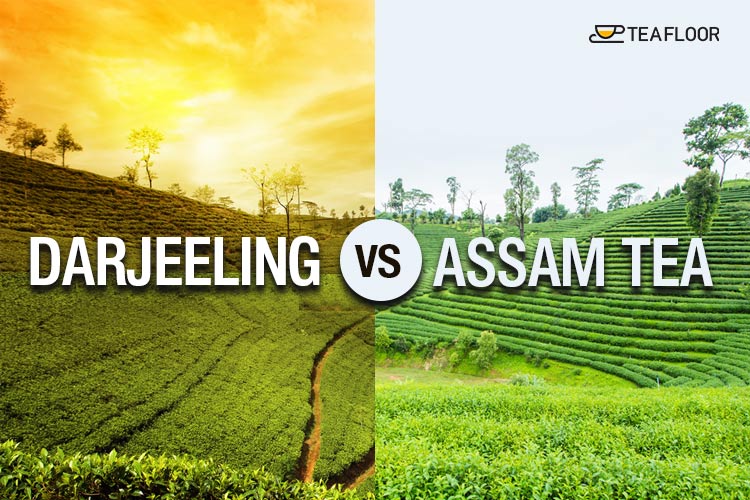 Tea was brought in India by the British and since then India has become a hub of tea production. There are three main regions in India where tea is cultivated – Darjeeling in the north, Assam in the northeast, and Nilgiri in the south. Darjeeling and Assam tea is known throughout the world and has one of the largest tea exports in the world.

Both tea get their names from the region they are grown in (Assam & Darjeeling respectively). They are considered to be of highest quality and are popular worldwide for their aroma and distinctive flavor.

Nilgiri tea in the south is on a rise and is gaining popularity as the demand for tea is increasing day by day.

Although, Assam and Darjeeling (in the state of West Bengal) lie adjacent to each other and the climatic conditions of both areas are similar but still there is a difference in the flavour of both the teas. This is mainly due to the result of the cultivation process.

Let us know more about these teas individually.

In India, the state of Assam lies in the northeast corner of Eastern India. Assam has a climate similar to the South East Asia. The warm climatic conditions, the loamy soil and the exhaustive rainfall have made Assam one of the productive tea producers in the world. There are approximately 800 tea estates in Assam which produce “Assamica variety” of tea.

Assam tea is produced only in a few months of the year. The tea leaves are glossier and darker in color when processed. The flavor is bold and rich in taste with a feeling of nuttiness in it, and is best tasted when mixed with milk, cream and sugar. It also has an earthly flavor in it and it is said the discovery of the Assam tea was made in the jungles.

Darjeeling tea is world famous and is considered to be one of the most admired tea growing regions of the world. It is located at the foothills of the Himalayas encompassed around a very small area. The tea plantation in Darjeeling area occurs on the foothills of Kanchenjunga peaks and slopes of around 45 degrees. Due to these peaks and angles, easy drainage of the rainfall occurs in the tea field.

This tea does not grow beyond a height of 6000 feet and the higher plantation is responsible for the concentration of flavor. Darjeeling tea is known for its unique “muscatel flavor” and the various factors responsible for this flavor is the climate, altitude and soil mainly. The tea here is often termed as the “champagne of teas”. There are more than 80 tea gardens in the area of Darjeeling. These estates cover over 17,500 hectares producing over 9 million kg of tea engaging about 50 percent people of the district. The tea has varied leaf colours like, green, black, gold and white. The tea infusion is light golden in colour. The leaves are tender and fragile compared to other teas.

Due to high demands of Darjeeling tea around the world, several areas of the world labeled their tea have Darjeeling tea. Various governing bodies and organizations like the European Union have given legal protection to Darjeeling tea and set standards on production and labeling. Now, tea produced only in Darjeeling that meets its supreme standard can be labeled and sold as Darjeeling tea.

Both Assam and Darjeeling tea areas produce Black Tea and are derived from the same tea plant. They both have good amounts of caffeine. These were the similarities, now let us look the differences between the two of them.

Distinction between Assam and Darjeeling Tea

Assam has short duration winters, hot – humid summers with plenty of rainfall, and this type of climate is ideal for tea cultivation. This is the reason that most of the tea production of tea occurs in this region.

Darjeeling is a comparatively smaller area for tea production and the climate is cold and harsher than the Assam which slows down the growth of tea. Tea plantation is more difficult in the area of Darjeeling as compared to that of Assam.

Assam has a higher production of tea but when it comes to demand and popularity, Darjeeling tea take a toll over Assam tea in terms of quality, flavour and aroma.

Tea leaves are harvested depending largely on the region in which they are being grown and can vary from season to season with fluctuations in weather. The timing of the harvest is of utmost importance as it can take only a few days for a bud to appear, open up, and grow into a large leaf.

Assam has two harvest seasons only.

First Flush- The first harvest starts in March and is called the First Flush. Teas of the first flush have a fragrant, fresh, flowery character with golden yellow infusion.

Second flush- The second harvest starts in May & June and is called the Second Flush. This season tea is the best quality Assam tea and is known as “Tippy Tea” due to golden tips on the tea leaves. This tea has a special spicy, malty character with a rich coppery red to deep brown coloured infusion.

First Flush – Starts in the months of March to April and are plucked while they are still tender new shoots on the stalks of the tea bushes called “buds”.  The teas are delicate, floral with a pale infusion. This tea is high in polyphenolic content displaying characteristic astringency due to winter weather. This tea is generally less oxidized during processing and appears much greener than most Black teas

The Second Flush – Starts in the months of May and June, the tea produced is well-rounded, mature and fruity in flavor. This is during the second flush that the unique muscatel flavors come into play and the finished teas take on a stronger, smoother character. Most Darjeeling tea on the market is from the second flush, and is often not labeled as such, simply because selections from the other seasons are far less common to see for sale

The Monsoon Flush is harvested in September after the heavy rainfalls in the region and is a stronger tea with a deep colour. The heavy rains and heat drive rapid leaf growth, but this same speed and “easy growing conditions” result in much more muted flavors. “Monsoon Darjeelings” are usually used for iced or bagged teas.

The Autumn Flush, harvested in October & November has large leaves and produces a full-bodied, strong yet naturally fruity flavoured tea. Autumnal teas are often rich and smooth with a nutty, sometimes woody characteristic that is remarkably different from the briskness of the First Flush

The main difference comes with location on where the teas are grown. Darjeeling is grown in the regions located high in the foothills of the Himalayas, while Assam tea is cultivated on lowlands. Altitude is particularly important for Darjeeling tea, especially for its unique flavouring and structure. Assam has a high production of tea due to the rich, clayey soil along the Brahmaputra river valley. This soil coupled with its climate makes Assam the perfect place for tea production. Out of the total 900 million kg of tea produced in India, 600 million kg comes from Assam.

Assam Tea has a rich, deep-amber colour and is famous for its rich, full-bodied cup. The Assam tea is said to be darker and redder in color than Darjeeling.  Many tea experts say that Darjeeling tea does not change color when brewed. The Darjeeling tea leaves are smaller as compared to that of the Assam tea. Darjeeling are also said to have fine hairs on the underside, which are lost during drying.

Assam tea has a stronger flavor than the Darjeeling tea i.e. the former is has a nutty and earthy nuance to it.

Assam is easier to grow and stronger in flavor, which makes it a preferable candidate to brands for Lipton, Tetley or Celestial Seasonings.  Assam grows year round.  The region of Assam is also considering larger than Darjeeling.  Darjeeling, on the other hand, has four separate growing periods, which produce smaller loads.  There are 80 Darjeeling tea gardens in less than 70 square miles compared to the 800 tea estates in Assam.

So to summarize the differences:-

But all the factors like price, availability etc is a secondary matter when it comes to preference. Some like Assam tea more than Darjeeling tea just because they like the taste of good old chai while some prefer Darjeeling tea because of the unique muscatel flavor. Hence, it all depends on the final choice of the consumer.