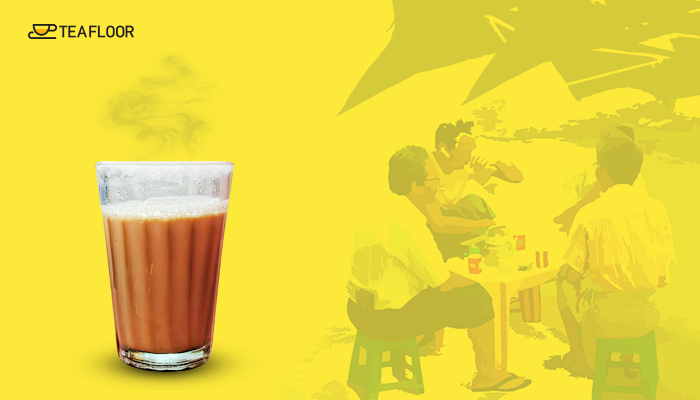 When someone says friendship, it’s felt deep inside our hearts. From a child to a grown up man, everyone is aware of this one magical feeling. It is something that means more to us than any other relationship. The best part of our childhood memories are the times that we’ve spent with our friends. And as we grow up, these memories tend to hold a special value in our lives. We might come up with a lot of things that help to keep our bonds stronger than ever. They can be anything, right from sharing our favourite food, clothes, movies, books or just a simple cup of aromatic tea. It’s no secret that great bonds are built over a cup of tea; something that has always been known to build new conversations. Here is an interesting story for you to enjoy over a cup of tea.

To begin with, let’s take a generic situation that is faced by every group of friends.

“Let’s make a WhatsApp Group to stay in touch.”

It’s definite that as soon as this happens, our inbox is flooded with messages. However, sooner or later, the number of messages exchanged are reduced, and emotions as well as laughter shared becomes negligible. Something like this also happened with this group of friends who promised to stay together after their school life came to an end. From a small town of Agra, all of them scattered to different parts of India. From New Delhi to Mumbai to Chandigarh, they spread their wings everywhere. Getting separated after staying together for more than ten years was definitely a tough thing to do. It’s unquestionable that we all have faced this situation at least once in our lives.

Making a number of promises to each other, they went towards the roads they were destined to take. As time passed by, the number of messages exchanged reduced, and so did the conversations among them. Even though none of them wished for it; time took away the control of things from them. Some got too busy with studies, others with work while some found better people. Amidst all this, a few months passed; so did a few years, and as the list of contacts in everyone’s phone book increased, the names of friends from school almost got forgotten.

One fine day, a simple message popped. It was from that one group named “always together”. The message said- “Reunion this friendship day?”

When this message popped on the screen there was no single face among the group members that was lit to see it, instead it was a shock for most of them. What happened next is something anyone can easily guess- the message was ignored by most of them. Although, some of them did reply just for the sake of it but no true feelings. The messages said-

“Who celebrates friendship day now, are we still in school?”

It was a week before friendship day, and there was complete silence in the group chat. However, deep inside, nostalgia had struck them all and the need to meet had took a toll on their minds. So, three days before friendship day, the group messages started to pop again and one by one all of them agreed to come back to their home town. Some willingly while others reluctantly were ready to come. The meeting point decided was their small old school.

The time had finally come, it was a fresh morning, a new day, a day to meet old friends and relive old memories. It excited some of them while others were little anxious about the awkwardness they were going to face.

When all of them finally met, there were 9 friends. After all the awkward greetings and hugs exchanged the first thing that they noticed about their surroundings was the change in their school. It was not the same old little building. It had turned into something that could reside double the population of what it could in the past few years. Meeting outside the school filled them with nostalgia and sadness all together. After taking a good look at their old school, they decided to return to the same old tea stall that they used to go to after school every day. The moment they reached there, each one of them was so filled with wistfulness that they could hardly speak to each other for a few minutes. Although the place had now completely changed all of them went down the memory lane. They were reminded of those chilly mornings when they were late for school and had to remain outside. This tea point was then their favourite place to hang out. Or when, the school canteen had nothing good enough for them, the combination of chai and biscuits was a perfect fit. Also, when the unforgettable moments of heartbreaks happened during school days, that small stool outside the tea stall was the best place to shed tears.

Slowly they started to notice the changes that their favourite place had gone through. Earlier, the small tea stall, which was just a hut was now nothing like it used to be. The chai wallah who at that time was newly married, now had two kids. One of them going to school and the other working with his father at that tea stall or rather, the new tea shop. That small stool was now replaced by chairs and they no longer had to fight for that one single place to sit. Reliving all these memories, the awkwardness that had initially set in slowly started to go away. As they sat in that new tea shop and ordered their childhood favourite masala chai with rusk, conversations began to evolve. Talking about the old memories of school when they were either thrown out of the class or praised for their good deeds, they rebuilt those shaken bonds. With every new sip, came up new stories of their childhood. The sound of their loud laughters could be heard inside as well as outside the shop.  They were all reminded of old promises that they had made to each other of always being together. It left them with tears of joy and sadness altogether. This was the effect of the good old tea on this small group of people that were meant to stay together forever.

This is just one story, there can be many more and the number will keep on increasing. That’s the effect that our age old tea has on this world. So, this Friendship Day  give up everything that’s holding you back from seeing your friends, hold your tea cups a little tighter to make your bonds a little stronger and better than ever.

“A cup of tea shared with a friend is happiness tasted and time well spent!” – Anonymous.

One Reply to “This Friendship Day, Let Tea make your Bonds Stronger”