2018 was a year of progress for the team of Teafloor. There were many happy welcomes and many opportunities acquired to shine. The company, in its own hard-working pace, grew on multiple levels, expanding on various platforms. Simultaneously, while trying to balance out our professional and social life, the staff worked day and night to get their work done. With the entire year’s work culminating into fruitful results, the management decided to reward the team with a small token of appreciation. After all the late nights and early mornings, to escape the monotony of stress and exhaustion and start the new year on a fresh note, the entire team of Teafloor went on a company retreat. A trip that was embellished with exciting games, adventures and, of course, long conversations over tea.

At the break of dawn, on a dewy January morning, we gathered at our base of operations to board the bus to our destination- a snug little resort in the foothills of the Aravali. While waiting, we indulged ourselves in a cup of tea, for nothing beat the morning chills and awaken enthusiasm like a spiced cup of ginger tea. Once done with our morning ritual to share a cup of tea, we moved ahead to board the bus. The entire two-hour drive was a mix of laughter, songs and a seriously competitive game of Antakshri.

On arrival, our excited moods took a slight dip when we saw our residence for the next two days. Situated in the foothills of the Aravali range, the resort was, what most people would call, dry. As winters had just set in, the green grass from the photographs had dried down to light brown shade, with patches of random green, here and there. The shrubs around the scenic view weren’t in the best shape, and the accessories that once adorned the trees and fountains were unkempt, some even broken.

However, this didn’t break our enthusiasm. Our only thought was that no matter what the place looked like, it was the feeling of togetherness that truly mattered. Having spent so much time at work, everyone felt a wave of relief just standing in the resort boundaries, finally getting to improve their social life. Hopes and spirits were lifted once lunch got over, and everyone proceeded to the resort grounds for a round of recreational games and other fun activities. What started with a game of dog-in-the-bone, ended up with uncontrollable chuckling that followed a game of dodgeball.

The sound of birds chirping and retreating to their nests, as the evening dew settled in, accompanied with the smell of nature and hot Bombay cutting chai was all it took to drain all the stress and anxiety away from everyone.

The cold slowly settled on the ground, making its presence even more prominent as everyone pulled out their thick jackets and scarves. Refreshed from an evening of physical activities, the staff was now sitting around the nascent bonfire, watching as the embers of the fire started picking up glow.

Slow acoustic music fluttered in the air, along with the smell of freshly cooked snacks, as everyone joined in on the music and conversations around the bonfire. The night slowly fused into the mellowness of the flora around us. For the first time, in a really long time, everyone was away from their laptops and computers. Not a single thought about the next assignment, or any urgent deadlines. The thoughts of the next social media post or the next campaign, for once, weren’t occupying our minds.

It felt strangely peaceful to start the New Year on such a stress-free note. A gathering where everyone shared stories and jokes, all the while, introspecting their personal growth.  The peace and calm, however, were a sign of the unlucky fate that awaited us the next morning.

The next morning, though we woke up with the intention of a sunbath, we were instead, met with dark grey clouds of utter cold and despair. The crisp heavy rain washed away all our plans for a trek around the foothills. Instead, to make the best out of this weather, we snuck back into shelter and enjoyed a morning feast of tea and snacks. Nothing soothed the rainy chill better than a hot cup of ginger tea and some oily deep-fried munchies. The feeling of sitting there and watching the pitter-patter of raindrops was like a scene in a movie, with the Train’s ‘Drops of Jupiter’ playing in the background. Tea was always a saving grace when it came to undesirable weather conditions. Be it rain or blazing heat, chai was the solution to almost every blue feeling. 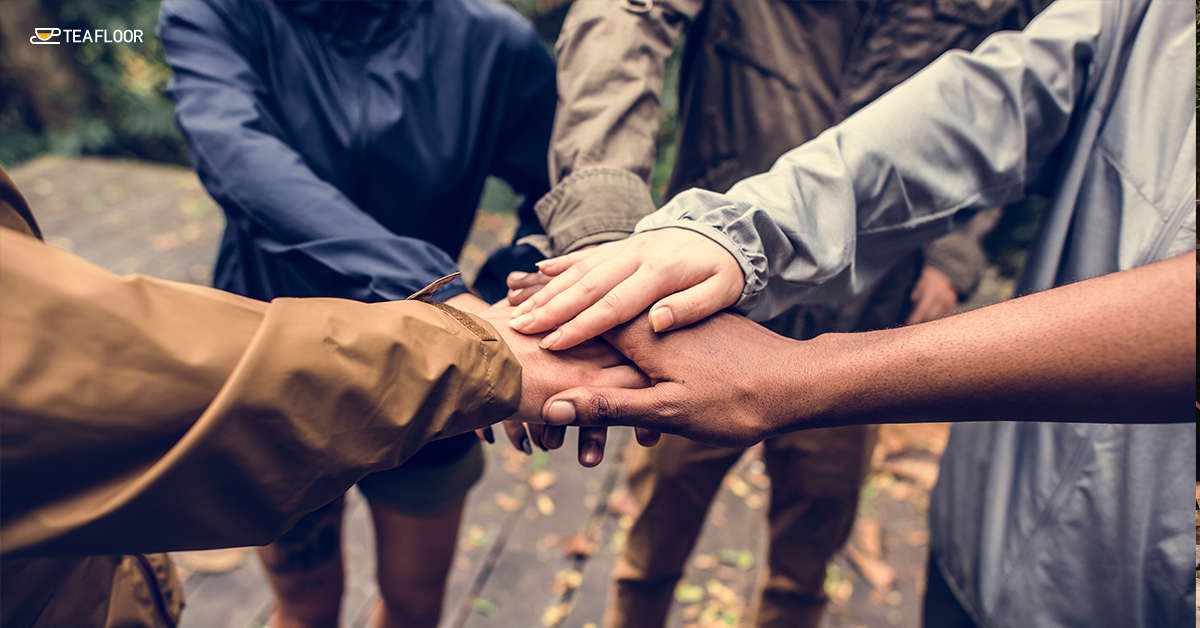 Fortunately, Mother Nature decided to shine upon us and shed her clouds of misery. Though, by now, we were all very comfortable in the resort. But it was finally time to strap on some shoes and explore the nearby valley. So, with a headcount of 90% of the entire team, we were all set to brace the thorny bushes and rocky terrain. What we didn’t know yet was the adventure that awaited us, one that we would recount for the next few months and giggle over.

Sometimes, we as humans can overestimate our navigation skills. And that is exactly how out of the 90% headcount, a small fraction of about 20%, got lost in the woods. Well, getting lost in the woods is an over-exaggeration. In truth, we lagged behind the entire team and ultimately were lost, especially when our second guide, who was leading us, also lost the way. At that moment, the ultimate irony of life was that we were the fraction that was super excited for the trek. After countless trial and errors and walking aimlessly in the woods, hoping for a hail mary, we ended up at a crossroads. The moment we found the crossroads was almost poetic. The only difference here was that we weren’t taking the one less travelled by. We were going to sit and figure out a plan. Though, after a while, we were hysterical in laughter, almost unsure of how we ended up in that place.

Suddenly, a fluttering fragrance of tea with hints of mint, ginger and some other spices had us walking in its direction. The moment we reached the origins of the aromatic tea, we were met with a small tea stall located right at the entrance of our resort.

And just like that, tea had saved us once again.

The rest of the day was more about recollecting ourselves and gathering to depart from the resort.

During our drive back to the city, we all got a moment to sit and think about our work and social life. Many times, finding a balance between these two factors can be extremely exhausting and can put a strain on our relationships. However, after this trip, a lot of us came back home with more clarity about our future plans and what should be prioritized to make sure that we stay on top of our games.

The company retreat gave us the opportunity to see each other in a new light. We understood each other’s strengths and weaknesses, and how they could be incorporated into the work plan to improve productivity. The agenda of the company retreat was to relax the team after a heavy year. This relaxed mindset would help in better brainstorming for ideas for the New Year.

The one thing, however, that remained constant during the entire trip was the presence of tea. Surprisingly, tea is a very subjective thing for us all. It is ingrained deeply in our lives. From small wake up calls to big celebrations, we cannot think of a day in our lives where we don’t drink tea.

During turbulent situations, tea isn’t just a saviour, but also a friend, a comforting arm, and a gentle whisper, for those times when we feel down or burdened by the regular irregularities of our lives.