Being a drug whose appeal has shown no sign of dissuading, caffeine is a stimulant for the central nervous system which is present in almost every beverage that we consume. An ingredient of a beverage that had over 136 million bags exported around the world in 2012, caffeine’s popularity is one that knowingly or unknowingly will not decrease even in the coming years. Many people around the globe choose to consume caffeine in tea and coffee for their sole purpose of giving them a kick of energy early in the morning or relief during their hectic working hours.

Caffeine is capable of stimulating the brain and the nervous system. Plus, it is a diuretic. Found in beverages like tea, energy drinks, chocolates, coffee, soda etc. caffeine is an ingredient that is both a boon and a bane for mankind.

Before we begin to compare the amount of caffeine content in your favourite beverages, let us understand how caffeine works.

How Does Caffeine Work?

A lot of the functioning of caffeine in tea and coffee depends on our brain chemistry. Your brain produces a chemical known as adenosine, which binds to adenosine receptors. This binding cause drowsiness by slowing down nerve activity. Plus this process also causes blood vessels to dilate, which allows more oxygen into the organ during sleep.

However, in the case of caffeine, the brain mistakes it for adenosine and binds it to the receptors. But, instead of causing nerve activity to slow down, caffeine speeds up the nerve cells. Caffeine also causes the brain’s blood vessels to constrict, because it blocks adenosine’s ability to open them up. Due to this effect of caffeine, a lot of headache medicines contain caffeine. The constricted blood vessels in the brain can help stop a vascular headache. 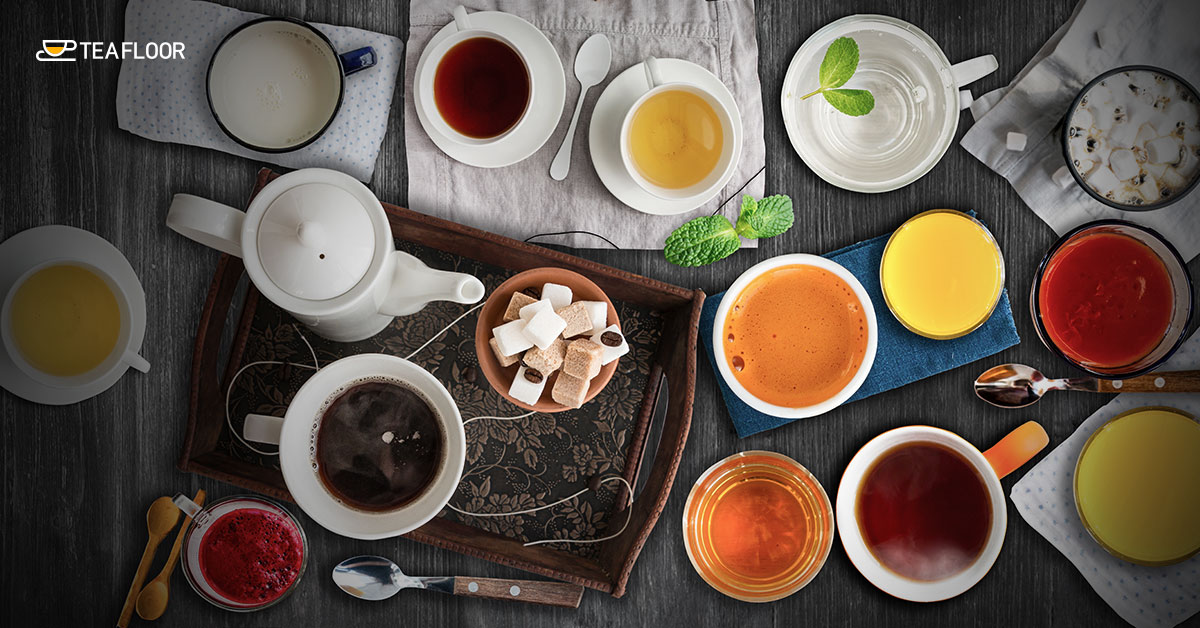 One of the most common ways of ingesting regular doses of caffeine is drinking coffee. The coffee consumptions of Indian doubled in the last two decades, showing us that this beverage is much loved. Coffee contains about 95mg per 350 ml of coffee. However, with its variants, this composition can slightly differ. For example, espresso-based drinks have about 60 mg of caffeine per 30-50ml shots, whereas instant coffee contains 30-40 mg caffeine per cup of coffee. But out of all types of coffees, decaf coffee contains close to no caffeine, which is why a person can opt for decaf coffee late in the night. Coffee consumption is something that, however, needs to be kept in check. Excessively drinking coffee can have adverse effects like anxiety, insomnia, irritable bowels, high blood pressure, caffeine addiction, rapid heart rate, etc.

Probably the most popular energy drink of the century with globally renowned fame, Red Bull is surprising low in caffeine. Unlike popular belief, the energy drink contains only 80mg of caffeine in a 250ml can. Created almost 31 years ago in Austria, Red Bull is now a name that is synonymous to all energy drinks. With the #1 status worldwide, Red Bull is sold in over 170 countries. The sole purpose of energy drinks is to provide you with a burst of energy and Red Bull does that solely based on their sugar and caffeine. Not just this, but it is also available in four variants- original, sugar-free, total zero and cranberry edition.

Owned by the Hansen Natural Corporation, Monster energy drink first hit the market in 2002. It was a surprising contrast to Hansen Natural’s reputation as a healthy, preservative-free beverage company. Monster Energy drinks have large amounts of caffeine, sugar and sodium. The caffeine content in Monster is approximately the same as Red Bull, i.e. 80mg per 250ml. This blend of ingredients provides the rush you feel after drinking the beverage and includes chemicals like L-carnitine, glucose, caffeine, guarana, inositol, glucuronolactone and maltodextrin.

Cola is a popular flavour of soda around the world. Although the kola nut, from which the flavour of cola soda comes from, does naturally contain caffeine, the majority of the caffeine in cola is added by the manufacturer. Colas typically contain between 30-50 mg of caffeine per 12 fl oz (355 ml). However, with cola, the amount of caffeine is not as much a concern as the sugar or sweetener substitute in them. Colas are rich in sugars, therefore they promote obesity and other unhealthy choices in life. It is best to avoid cola on a regular basis due to its contribution to high sugar levels in the body.

Many of the common benefits of any caffeinated beverage include bringing relief from fatigue or drowsiness and increase alertness. However, consuming caffeine without monitoring your intake can lead to an increased heartbeat, irritable bowels, uneasiness, acidity and jitters. Plus, too much caffeine at the wrong time of the day can actively affect your sleep cycle in the wrong way. The bottom line is that caffeine’s main effect is on the brain. It stimulates the brain by blocking the effects of the neurotransmitter adenosine, thereby causing the above reactions.

Experts suggest that an amount of 400mg of caffeine per day is alright for the human body. That is about 2-3 cups of coffee. And while many initially believed caffeine to be an unhealthy compound, much research contradicts that.

Therefore, it is safe to say that enjoying your daily cup of coffee, tea or energy drink is not that bad and can be a good way to promote a healthy life.