When comparing coffee and tea, it is certainly a difficult choice to make for most of us. Since time immemorial there have been debates over the benefits of these two beverages. What most people usually do is overindulge in whichever beverage they prefer more and thus, fail to weigh their benefits and side effects.

It’s true that coffee is one of the most preferred drinks, when it comes to revitalising the body. However, tea has been the love of a number of people for centuries for a reason. They strongly believe that there is certainly no crisis that tea cannot put an end to. For many, coffee can serve this purpose too, but the added benefits of tea cannot be avoided.

Let’s have a look at what tea has to offer over coffee.

It is a common belief that coffee has more caffeine than tea. However, that’s not entirely true. Tea has the same amount of caffeine as coffee (equal servings). Nevertheless, their properties affect the body differently. While both of them will work on energizing the body, the effect of coffee is going to be very short lived. It will reduce your energy level as fast as it lifts it up. Whereas, in the case of tea, your body will rejuvenate from within and have a long lasting effect on the body. Thus, tea is always a better option when you have to keep it going.

Antioxidants are good source to keep your body away from diseases and make you feel fresh and healthy, and tea has them in abundance. Be it any tea, green, black or white, all of them are equally rich in antioxidants. This makes them a metabolism booster. Other than this, tea is a calorie free drink which helps you to stay fit, and improves the overall functioning of the body. 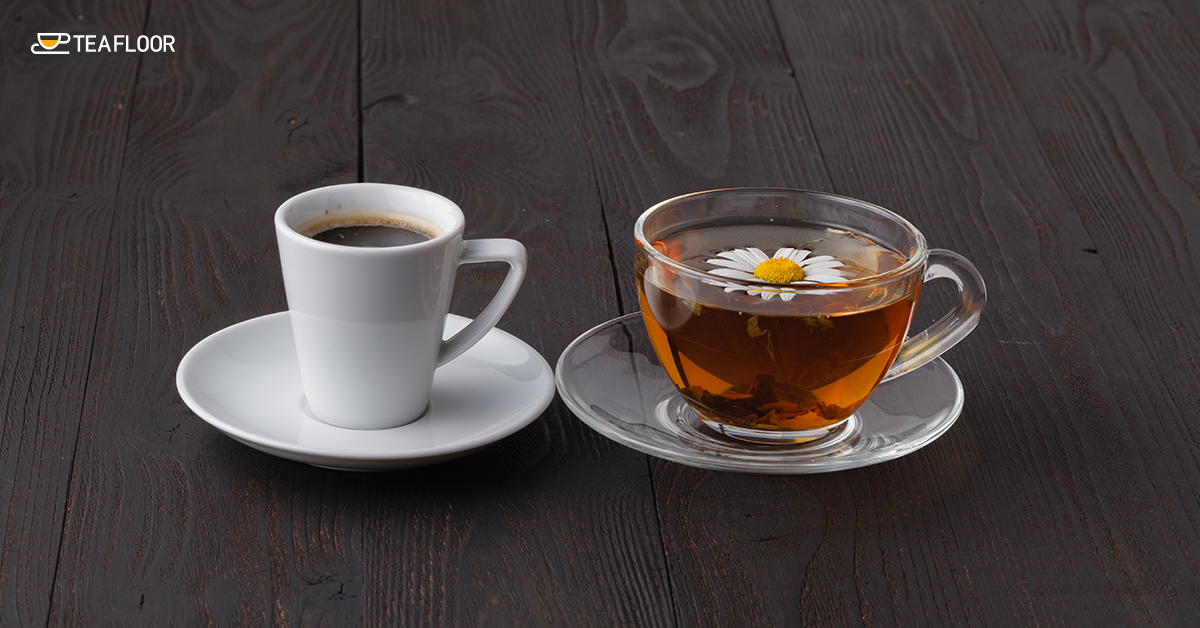 As far as dental health is concerned, tea is definitely preferential, as it protects the teeth from the harmful bacteria that inflicts the gums and teeth because of the leftover food. The compounds present in tea are capable of killing or suppressing the growth of cavity causing bacteria and prevent gum diseases. On the other hand, coffee is one of the main reasons people have stained teeth as it leaves stains because of its dark pigments.

Tea and coffee both have known to cause acidic problems to people. However, coffee is more acidic than tea. It can be hard on stomach, potentially causing issues like heartburn, acid reflux, or other GERD symptoms. On the other hand, herbal teas like Chamomile and Mulethi are known to soothe acid reflux.

It is scientifically proven that regular tea drinkers show a calmer physiological response to tough situations. Overall, people who drink three cups a day appear to have a 37% lower risk of depression than those who do not drink tea. Coffee, on the other hand may not have the same impact on people.  Some reports state that it makes them feel like their nerves are jangling.

Both coffee and tea have been linked with reduced cardiovascular diseases. A Dutch research, published in Arteriosclerosis, Thrombosis, and Vascular Biology: Journal of the American Heart Association in 2010, proves that drinking more than six cups of tea in a day reduces the risk of heart diseases by 36 per cent compared to those who drink less than a single cup of tea per day. Coffee drinkers, on the other hand have a 20 per cent lower risk of heart disease. Also, one must know their caffeine tolerance level as too much of the same may negatively affect their bodies. It is advisable not to consume more than 400mg of caffeine a day as people may experience a disturbance in their sleeping pattern.

Numerous fitness magazines claim that black coffee is staple for dieter’s regime as it may help in fat burn. However, it might not altogether be true, as a number of studies reveal that a healthy person’s blood sugar levels hike up after eating a high-fat meal, but the spike doubles after having both a fatty meal and caffeinated coffee – creating a risk of diabetes. On the contrary, there are a number of small studies that indicate green tea as the best choice to support weight management and a balance in metabolism.

Let’s be clear that there is nothing wrong with coffee, instead it is one of the most preferred beverages in the world. However, the benefits of tea over coffee are numerous, which is why tea holds a special place in people’s heart.

teafloor.com/
No comments yet
Reasons You Should Choose Tea Over Coffee Tea Drinkers Tea lovers tea vs coffee